John Fetterman, the New Lieutenant Governor of Pennsylvania, Will Head the Board of Pardons 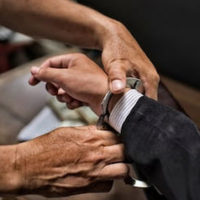 Recent news cycles have made it difficult to miss the recently sworn-in Lieutenant Governor of Pennsylvania, and leave it to the media to focus on outward appearance instead of on substantial issues.  With his shaved head and his gentle giant figure, John Fetterman does not look much like how your grandparents would expect a lieutenant governor to look.  A report in The Morning Call noted that, in his dark gray suit, Fetterman looked very different from the way the people of Braddock, the town where he was mayor, are used to seeing him.  As mayor, he often came to work wearing a short-sleeved shirt that revealed the tattoos on his arms, tattoos which, if you look closely at them, document important events in his personal history.  Meanwhile, The Philadelphia Inquirer mentioned that Fetterman’s three children planned to celebrate their father’s new leadership position with a dance called flossing.  These clickbait stories miss the point, though.  Regardless of Fetterman’s political views or unique personal characteristics, if you are in prison or on parole, you may only think of one thing when you hear the phrase “lieutenant governor,” and that is governor’s pardons.  If you plan to seek a governor’s pardon in Pennsylvania in the near future, a large part of the decision to grant the pardon will belong to John  Fetterman.

When a person receives a governor’s pardon, it means that the person is no longer obligated to receive the penalty for the crime of which he or she was convicted.  Therefore, if an incarcerated person receives a pardon, the state waives the rest of his or her prison sentence, and the person can go free almost immediately.  Likewise, a person who receives a pardon while on parole no longer needs to submit to the requirements of parole.  It is not the same as being exonerated, though, because the guilty verdict remains on your record.

In Pennsylvania, the lieutenant governor is the head of the Board of Pardons.  The board also includes the attorney general and three other members, whom the governor appoints.  The Board of Pardons votes on each case, and in instances where at least three out of the five members vote to pardon the person, then the board recommends that the governor issue a pardon.

When he was sworn in as Lieutenant Governor of Pennsylvania, John Fetterman gave a brief speech in which he emphasized his commitment to bipartisan efforts to act in the best interest of the people of Pennsylvania.  Pennsylvania is famous for being a swing state; it played a deciding role in the 2016 presidential election.  Fetterman is a Democrat, but the Republican party holds a majority of the seats in Pennsylvania’s legislature.  In his speech, Fetterman did not go into details about his policy goals, but voters will probably find out more about these soon, as Fetterman has expressed interest in running for a seat in the U.S. Senate in 2022.

Reach Out to Our Office Today for Help

Contact the Law Offices of Gary E. Gerson in Pittsburgh if you have received a guilty verdict, to discuss the possibility of applying for a governor’s pardon. We are eager to assist you throughout each step of your case.

By Gary E. Gerson | Posted on April 3, 2019
« When Is Sending Someone a Picture of Hannibal Lecter a Crime?
Court Drops Charges Against Woman Who Filmed Her Arrest »