An End To Sentencing Disparities Between Crack Cocaine And Powder Cocaine? 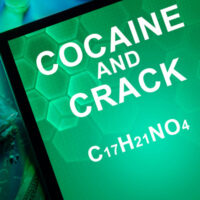 In the 1980s, politicians and the media aimed to make people afraid of crack cocaine, and they succeeded.  Elementary school students in the 80s received lessons in health class about the dangers of drugs.  Some of the drugs seemed perfectly harmless; most kids had seen their neighbors, if not their own parents, drinking alcohol and smoking cigarettes.  The others had unfamiliar sounding names; as a kid, you had heard of the drug that killed Elvis Presley neither by the name of amphetamines or speed.  Heroin was scary and cocaine was scarier, but only together were they able to kill John Belushi.  Crack cocaine was the scariest drug of all; there were reports on the news every night about the dangers of crack.  Kids taunted each other in the schoolyard by calling each other crackheads and crack babies.  The absurdity of the War on Drugs fearmongering was a favorite trope of 90s irony, but decades later the laws that impose much harsher sentences for possession of crack than for equivalent amounts of powder cocaine.  That could change soon, but for the time being, the best option is for your case to result in acquittal, pretrial diversion, or the dropping of charges.  The chances of getting one of those outcomes are higher if you contact a Pittsburgh drug crime lawyer.

Crack Cocaine Stereotypes Have Been Debunked, but Mass Incarceration Remains

In 1986, the Reagan administration enacted the Anti-Drug Abuse Act, which set the sentencing ratio for crack cocaine compared to powder cocaine at 100 to 1; in other words, you could get the same sentence if you were convicted of possessing five grams of crack as if you were convicted of possessing 500 grams of powder cocaine.  This meant that many thousands of people got sentenced to decades-long prison sentences for possession of small amounts of crack that they could not possibly have meant to resell.  Meanwhile, there is no measurable difference between the effects of powder cocaine on the body and the effects of crack.  Pursuant to the Fair Sentencing Act of 2010, the sentencing ratio is now 18 to 1.  In federal cases, the mandatory minimum sentence for possession of 28 grams of crack is five years in prison, the same as for 500 grams of powder cocaine.

Last year, the House of Representatives introduced the EQUAL Act, which would eliminate the sentencing disparity between crack and powder cocaine.  This year, the bill is under consideration in the Senate, and lawmakers are attempting a bipartisan deal.  The proposed deal would reduce the sentencing ratio but would not eliminate it entirely.  The Senate may vote on a version of the bill before the end of this session; this version of the bill would make the sentences for crack cocaine convictions 2.5 times as high as the sentences for possession of an equivalent amount of powder cocaine.

A criminal defense lawyer can help you if you are being accused of possession of crack or powder cocaine.  Contact the law offices of Gary E. Gerson in Pittsburgh, Pennsylvania about your case.