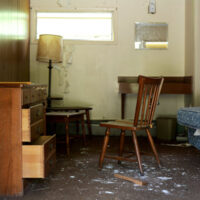 Remember when Keith Moon of The Who flushed a firecracker down a hotel toilet?  When Ozzy Osbourne threw a TV out of a hotel room window, he was not doing anything different from what the Rolling Stones had done years earlier.  And the less said about the Led Zeppelin mud shark incident, the better.  Sure, it’s fun to read about rock stars trashing hotel rooms.  They probably have it built into their tour budgets to pay for cleanup of the damage they cause to hotel property.  You are not a rock star.  Being a slob is not a crime, and no one expects hotel guests to leave the rooms spotless when they check out, but you can get in serious trouble for intentionally or recklessly damaging hotel rooms or other property.  If you are facing criminal charges for damaging someone else’s property, contact a Pittsburgh property crimes lawyer.

Conrad Lee Riffle III owns a brewery supply company in Cleveland, Ohio, but by the time he had left a hotel room in Mechanicsburg, it looked more like the hotel rooms inhabited by the sort of people who visit Cleveland in order to be inducted into the Rock and Roll Hall of Fame.  Riffle checked into the Country Inn and Suites on June 28, 2021, and set his check out date for July 26.  When that day came, hotel staff entered his room to clean it, despite that no one had seen Riffle at the hotel for several days.

To say that the room was a mess was an understatement.  Linens had been stuffed in the toilet, the television had been smashed, and rotting food was on multiple surfaces in the room.  The damage to the room added up to more than $10,000.  Riffle, 30, is wanted on charges of criminal mischief, and a warrant is out for his arrest.

A property crimes defense lawyer can help you if you are facing charges for damaging a hotel room or an item of public property.  Contact the law offices of Gary E. Gerson in Pittsburgh, Pennsylvania about your case.