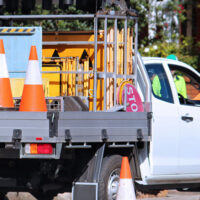 Even for those of us who do not have a larcenous bone in our bodies, certain items of public property are a source of temptation.  During study hall periods in high school, even the most straitlaced kids and the teachers’ pets shoot the breeze about which street signs they would most like to steal.  Who wouldn’t want an orange traffic cone as a trophy of one’s daring and dexterity?  Even judges can see the humor in cases where mischievous teens misappropriate inexpensive but iconic items of public property.  Stolen public property cases involve middle-aged defendants and vehicle theft are another matter, however.  If you are facing criminal charges for stealing property that belongs to a city or county in Pennsylvania, contact a Pittsburgh theft crimes lawyer.

In Pennsylvania, you can be charged with theft if you take someone else’s property without their consent.  The charge applies when you simply take the property, without using deception or the threat of violence and without forcibly entering the victim’s residence.  The penalties for theft vary according to the value of the property stolen; it can range from a third-degree misdemeanor to a first-degree felony.  The penalty for first-degree felony theft, in which the stolen items are worth tens of thousands of dollars, is a prison sentence of up to 20 years.  Additional factors such as the defendant’s prior criminal history can affect the sentence.

On the evening of July 7, Gregory Galvez of Bloomfield allegedly stole a county maintenance truck that was parked in the garage.  Police later discovered that the bed of the truck contained about 50 orange traffic cones and a leaf blower; county workers, who discovered the following morning that the items were missing, said that the cones had been in the bed of the stolen truck the previous day, but the leaf blower had been in the bed of a different truck.  The following morning, Galvez allegedly crashed the truck into a utility pole and abandoned it.  Police then observed that the county markings on the truck had been covered with white spray paint, and the truck’s county license plate had been removed and replaced with a different one.

Galvez, 47, was arrested several days later at a medical clinic he frequently visits.  Police found two empty stamp bags in his pockets, as well as a crack pipe and a substance they suspected was cannabis.  He could be charged with theft as well as possession of drugs and drug paraphernalia.  His bail was set at $15,000, but he was unable to post it and will likely remain in jail until his court appearance.

A theft crimes defense lawyer can help you if you are facing charges for stealing a vehicle or another valuable item of property.  Contact the law offices of Gary E. Gerson in Pittsburgh, Pennsylvania about your case.