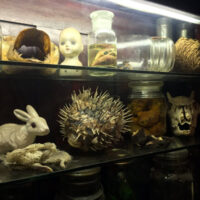 Most defendants in criminal cases plead guilty, and the ones that do not usually advance one of several common defenses.  For example, they might argue that the evidence the prosecution has presented is not strong enough to prove that the defendant committed the crime.  They might also argue that the defendant’s actions do not fit the definition of a crime; for example, the defendant might admit to fatally shooting the victim but maintain that he is innocent of murder.  He might argue that he acted in self-defense, which would make him not guilty of any crime, or that the shooting was accidental, which would be manslaughter.  In other cases, the defendant’s arguments focus on the fact that the state has violated the defendant’s rights in some aspect of the criminal procedure.  Defense arguments based on legal loopholes, but the defendant in this week’s news story claims that no laws are on the books to declare one way or another whether his actions were legally permissible.  If you are being accused of obtaining possibly illegal items through possibly illegal means, contact a Pittsburgh theft crimes lawyer.

Jeremy Lee Pauley of Enola is not the only person who finds the human skeleton and practices related to the disposition of human remains interesting.  He operates the Memento Mori Museum, which features human bones and other preserved body parts.  He also operates a website called the Grand Wunderkammer, where he buys and sells bones.  Both of his projects have been operating for a while and generate considerable traffic.  This summer, Scott ran into legal trouble when he tried to buy an order of human bones and organs for $4,000 from Candace Scott in Arkansas.  Law enforcement intercepted the body parts while they were in transit.  Scott, a mortuary employee, is accused of stealing the parts from bodies that had been donated to the University of Arkansas for medical research according to the wishes of the decedents.  The investigation into Scott’s actions is ongoing.  Pauley, 40, faces charges in Pennsylvania for receiving stolen property and for mistreatment of human remains.  He was released from jail after posting $50,000.  He intends to plead guilty, arguing that Pennsylvania has no laws criminalizing the purchase of human bones.

A theft crimes defense lawyer can help you if you are facing charges for receiving stolen property.  Contact the law offices of Gary E. Gerson in Pittsburgh, Pennsylvania about your case.