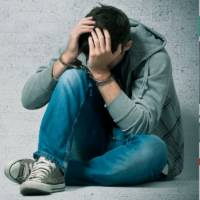 When you think back to your teenage years, you can probably remember many things that you regret doing and saying.  Whether your teen self experimented with drugs and frequently got into fistfights or simply did foolish and unkind things like skipping school and spreading malicious rumors, mostly for the purpose of impressing your peers, it still makes you cringe to think about it.  In theory, the juvenile justice system is dedicated to giving young people who break the law a chance to learn from their mistakes.  The idea is that treating teens like hardened criminals will make their future criminal behavior a self-fulfilling prophecy.  Offenses like stealing, trespassing, and vandalism tend to receive lighter punishments when committed by minors than when committed by adults.  Most importantly, convictions through the juvenile justice system get removed from your record when you turn eighteen.  You get to start over with a clean slate and, in fact, many so-called juvenile delinquents go on to live out their adulthood on the right side of the law.  For the most serious crimes though, minors can be tried as adults and face the same consequences that an older person would face for the same crime.  If you or a young family member of yours is facing criminal charges, contact a Pittsburgh juvenile crimes defense lawyer.

In 2017, 450 defendants aged 17 or younger were charged as adults in Pennsylvania; most of those cases were eventually sent back to the juvenile court.  Thus, fewer than 450 were convicted as adults, but according to Lauren Fine of the Youth Sentencing and Reentry Project, the number of teens in adult prisons is still too many.  According to Act 33, which was passed in 1995, all defendants charged with murder must be tried as adults, no matter how young they are.  Defendants aged 15 to 17 are typically charged as adults when the charge is armed robbery or any other offense that involves a weapon.

In February 2019, two teen boys allegedly robbed a man at gunpoint on the first block of West Ridge Street in Carlisle.  The victim said that one of the teens grabbed him by the neck, while the other pointed a handgun at him and threatened to shoot and kill him.  They stole his cell phone and wallet, which had $180 in cash.  The youths were charged as adults, and bailed was set at $99,000 for each of them, so it is likely that they will remain in jail until their trial.  One of the defendants was wearing a GPS-tracked ankle bracelet at the time of the robbery, because he was on probation.

Hiring a criminal defense lawyer can make all the difference in whether a juvenile defendant gets tried as a juvenile or as an adult.  Contact Pittsburgh juvenile offenses lawyer Gary E. Gerson if a young person in your life is facing criminal charges and needs legal representation by a defense attorney.