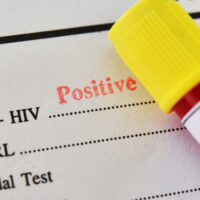 Despite that advances in treatment have made HIV infection a manageable and, in many cases, preventable condition, AIDS is still the scariest disease that many people in the United States consider a real threat.  For people who were alive in the 80s, the images of the extraordinary suffering of people with AIDS were unlike anything they had thought possible; a death as painful as dying from starvation or from the bubonic plague could await anyone who was exposed to HIV.  The prevailing sentiment in the 1980s was also that being “tough on crime” would neutralize almost any threat, from nuclear war to drug addiction.  Decades later, now that HIV-positive people have the same life expectancy as HIV-negative people, and now that mother-to-child HIV transmission has been virtually eliminated, many states still have laws on the books criminalize actions by HIV-positive people that would be legal if an HIV-negative person did them.  Pennsylvania is far from the worst state in this regard, but plenty HIV-positive people have been treated unfairly by the criminal justice system.  If you think that your HIV status is the reason for the unusually harsh charges or sentence you are facing, a criminal defense lawyer may be able to help.

When AIDS meant death, exposing someone to HIV, the virus that causes AIDS, meant killing them, or at least endangering their life.  We now know that HIV is less contagious than previously thought; one incidence of unprotected sex carries only about a two percent chance of HIV transmission.  Furthermore, people who take antiretrovirals to control their HIV infection are even less contagious; the chances of getting HIV from an HIV-positive person who has an undetectable viral load because of their medication are almost zero.  Despite this, Pennsylvania has two laws that specifically criminalize behaviors that carry a heightened risk of HIV exposure.  It is against the law for prisoners to intentionally expose another person to HIV-positive bodily fluids, including blood, saliva, semen, and urine.  Likewise, it is illegal for an HIV-positive person to engage in sex work that exposes customers to the HIV-positive sex worker’s bodily fluids.

A Lehigh Valley dentist may face criminal penalties for exposing patients to bloodborne diseases such as HIV, hepatitis B, and hepatitis C.  The Department of Health discovered that Dr. Palmer Cuttoro did not properly sterilize needles according to legally mandated infection control procedures.  The Department of Health encouraged all of Dr. Cuttoro’s former patients to get tested for these diseases.  Dr. Cuttoro surrendered his license to practice dentistry and has not yet faced a criminal investigation.  If a criminal investigation goes forward, especially if patients of his are found to have contracted HIV because of his negligence, he could face criminal charges.

Being HIV-positive is not a crime, and if the criminal justice system has treated you as though it were, a criminal defense lawyer can help.  Contact Pittsburgh sex crimes attorney Gary E. Gerson if you are facing felony charges.