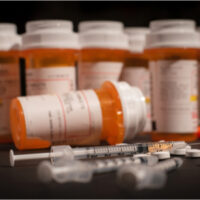 Washing your hands is an effective way of reducing your risk of exposure to a variety of harmful things, but irrational fears of contamination through accidental contact with the skin can do more harm than good.  Foodborne pathogens can’t hurt you unless you ingest them; you wash your hands after handling raw chicken so that the germs will not get to your mouth when you eat.  The bacteria that cause food poisoning are not capable of making you sick just by staying on your hands.  Likewise, the COVID-19 virus can only make you sick if it enters your nostrils or other mucous membranes; you wash your hands so that the virus will not still be there when you touch your face, not because the presence of the virus on your hands is dangerous in itself.  Remember those posters in the 80s and 90s that said, “You can’t get AIDS from a toilet seat?”  The stigma associated with some communicable diseases makes people irrationally afraid to interact with people infected with those diseases.  People with Hansen’s disease, formerly known as leprosy, used to be isolated in “leper colonies,” even though the risk of infection through casual contact with an infected person is relatively low.  Internet rumors, fueled by the stigma against opioid addiction, have made people irrationally afraid of suffering an overdose through accidental skin contact with opioids.  These same stigmas lend public support to harsh punishments for drug possession.  Prosecutors may try to argue that you are endangering other people simply by possessing a small quantity of drugs, but a Pennsylvania drug crimes defense lawyer can help you make justice prevail over hype and fearmongering.

Opioid Overdose and the Law

If someone overdoses on drugs, the law is more interested in helping that person survive and less interested in pointing fingers.  Pennsylvania’s Good Samaritan law states that a person suffering from an overdose is immune from prosecution, as is a person who calls 911 to get assistance for the overdose victim.  With the availability of naloxone, the chances of surviving an overdose are much greater than they were before, and the Good Samaritan laws have saved many lives.  In Pennsylvania, almost anyone is allowed to possess naloxone and administer it to an overdose victim; by doing so, Uber drivers, gas station attendants, and roommates of overdose patients have prevented overdose fatalities.  The Internet rumor-fueled fear of bystander overdose threatens to undermine these efforts.

A news report published this fall indicates the persistence of a rumor about bystander opioid overdose.  The version of the rumor spread on Facebook says that, in 2017, a police officer in Ohio accidentally got white powder on his hands while searching a car at a traffic stop.  The substance was never identified, but the officer began experiencing symptoms similar to opioid overdose, and he only recovered after receiving naloxone.  The American Medical Association has worked to dispel this myth, but Internet rumors persist.  According to the AMA, fentanyl (the cause of the alleged bystander overdose in the Facebook rumor) is very poorly absorbed through the skin.  Fentanyl transdermal patches took years to develop, and they only work if you wear them around the clock.

You can’t get criminal charges for overdosing assisting an overdose victim, but you can for providing drugs.  Like so many legal matters, it’s complicated, and it helps to have a Pittsburgh drug crime lawyer.  Contact the law offices of Gary E. Gerson about your case.