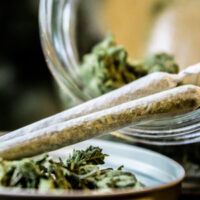 In Pennsylvania, marijuana is legal in all but name.  For several years, Pennsylvania’s medical cannabis program has made it legal for patients with qualifying medical conditions to possess small quantities of smokable or non-smokable cannabis products, provided that they have a valid, state-issued medical cannabis card.  Furthermore, many cities in Pennsylvania have decriminalized possession of small quantities of cannabis.  Therefore, in Pittsburgh and most of the other big cities in Pennsylvania, you will probably just have to pay a citation for marijuana possession, like you would if a speed camera caught you speeding.  It is still possible to get criminal charges for marijuana possession, though, if you possess a large amount of the drug or if you get caught in an area of Pennsylvania that has yet to decriminalize cannabis.  Although the verdicts of individual cases vary, Pennsylvania case law leans toward police being allowed to search your car purely because there is a cannabis smell in the vehicle.  If you are facing criminal charges because of an incident that started when the police smelled weed in your car, contact a Pennsylvania criminal defense lawyer.

The Fourth Amendment to the United States Constitution protects against unlawful search and seizure.  It says that law enforcement cannot search your home, person, or property without a warrant, and that a judge may only issue a warrant if there is probable cause.  Because of a series of Supreme Court decisions, motor vehicles are an exception to this rule.  Police do not have to get a warrant to search your car.  They must only establish that there is probable cause for the search; in other words, they must have reason to suspect that there are illegal items in your car.  Weapons or illegal drugs in plain sight are an obvious reason for a vehicle search at a traffic stop.  Many times, though, police have used the real or imagined smell of marijuana as an excuse to search a car, leading to many unfair convictions and many disputes in court as to whether the evidence gathered during the search was admissible in court.

An appeals court in Pennsylvania has remanded Timothy Barr’s case to the trial court in Lehigh County.  When police pulled Barr over for a traffic stop, they told him they would search the car because they smelled marijuana.  Barr showed them his medical cannabis card and did not deny that he had weed, but he argued that this did not give police the right to search the car.  They searched it anyway and found a gun; Barr was then charged for illegal possession of a firearm.  Since then, his lawyers and the prosecution have been at odds over whether to suppress the evidence police discovered in the search.  In general, in the post-decriminalization era, Pennsylvania case law holds that a weed smell is not, by itself, a valid reason for a warrantless search.

A Pittsburgh drug crimes lawyer can help you argue that the police were not within their rights to search your vehicle if they searched it purely because of a cannabis smell.  Contact the law offices of Gary E. Gerson about your case.

By Gary E. Gerson | Posted on October 26, 2020
« Couple Assaults Teen Employee During Mask-Related Dust-Up at Sesame Place
Despite Its Religious and Medicinal Uses, Salvia Divinorum Is Illegal in Pennsylvania »