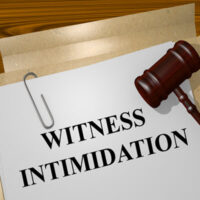 In some news stories about pending criminal cases, you hear that the defendant is in jail until the trial, but in other cases, you hear that the witness is out on bail.  Letting defendants in criminal cases remain free until they are convicted at trial or plead guilty is in line with the legal principle of not imposing criminal penalties on anyone who has not been convicted of a crime.  Likewise, the Eighth Amendment protects against excessive bail, among other things.  Whether the court allows a defendant to post bail, and how high it sets the bail amount, depends on the risk that the defendant will attempt to interfere with the judicial process.  Specifically, the courts decide to hold defendants without bail if there is a risk that they will try to flee or attempt to intimidate witnesses or destroy evidence.  If you do any of these things, you will face new criminal charges. If you are being accused of witness intimidation, contact a Pittsburgh criminal defense lawyer.

Witness tampering is when a defendant in a pending criminal case attempts to influence witnesses so that they will not provide testimony that would result in a guilty verdict.  In this context, the definition of a witness includes anyone whom the prosecution or defense has already asked to testify or anyone that they could reasonably be expected to ask for testimony.  Witness tampering is not limited to intimidation of witnesses by threatening physical violence or some other kind of harm if the witness provides incriminating evidence against the defendant.  It can also include bribing the witness or otherwise trying to persuade the witness to say or not say certain things.

In August 2022, Harold Michael Franks of Westmoreland County received criminal charges for aggravated assault, strangulation, illegal possession of a firearm, theft, and receiving stolen property.  He pleaded not guilty and was later released from jail.  During his two-week stay in jail, he allegedly made seven phone calls to a witness and made vague threats about what would happen if the witness testified against him.  The jail records all phone calls made by prisoners, and these recordings led to Franks being arrested again in October.

Franks, 40, is currently facing felony charges for witness intimidation.  He is also facing misdemeanor charges for simple assault, making terroristic threats, unlawful restraint, and reckless endangerment.  This time, the court set his bail at $100,000.  According to the TribLive website, the court has ordered Franks to stand trial on the witness intimidation charge.  His formal arraignment has been scheduled for November.

When you are in jail after an arrest, you should say as little as possible, exercising your right to remain silent.  A criminal defense lawyer can help you if you are facing criminal charges related to obstruction of justice, such as witness intimidation or tampering with evidence.  Contact the law offices of Gary E. Gerson in Pittsburgh, Pennsylvania about your case.