Close Menu
Pittsburgh Criminal Lawyer > > Sex Crimes > Yes, You Can Get A Prison Sentence For Failing To Register Paperwork

Yes, You Can Get A Prison Sentence For Failing To Register Paperwork 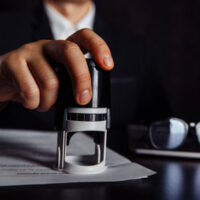 A man goes to prison because he did not file a form that he was supposed to file.  It sounds like a nightmare out of Kafka’s imagination, but it can happen right here in Pennsylvania.  For example, you can get criminal penalties for failing to file an income tax return, but most of the time, those penalties do not include prison time unless your failure to file your taxes was only one of the things you did wrong.  Case in point, no one goes to prison if, even though they didn’t file a tax return by October, they estimated in good faith how much they would owe on their income taxes and sent that amount to the IRS.  If you fail to register as a sex offender after the court orders you to do so, however, a prison sentence is a very real possibility.  If you are facing criminal charges for failure to comply with court orders after a conviction for a sex-related crime, contact a Pittsburgh sex crime lawyer.

Why Are the Penalties So Harsh for Failing to Register as a Sex Offender?

In 2012, Leon McGirt pleaded guilty to aggravated sexual assault of a minor; the crime and the criminal case took place in New Jersey.  Pursuant to the Sex Offender Registration and Notification Act, he is required to register as a sex offender in any state where he resides.  In 2018, McGirt completed his sentence and was released from prison.  He subsequently moved to Pennsylvania, and after moving here, he did not add his name to the Pennsylvania sex offender registry.  In February 2022, he pleaded guilty to failure to register as a sex offender.  McGirt, 45, could face a prison sentence of up to ten years and a fine of up to $250,000.

A sex crimes defense lawyer can help you if you are being accused of failure to register as a sex offender.  Contact the law offices of Gary E. Gerson in Pittsburgh, Pennsylvania about your case.

By Gary E. Gerson | Posted on July 26, 2022
« Man Who Sold Counterfeit Percocet Pills To Overdose Victim Sentenced To Prison For Involuntary Manslaughter
You Still Need A Defense Lawyer, Even If You Are Already Serving A Prison Sentence For Something Else »