Close Menu
Pittsburgh Criminal Lawyer > > Criminal Defense > Can You Get Criminal Charges for Participating in a Protest?

Can You Get Criminal Charges for Participating in a Protest? 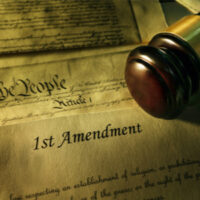 On October 26, police in Philadelphia fatally shot Walter Wallace, Jr.  Wallace, who suffered from bipolar disorder, was having a mental health crisis and behaving erratically.  His parents had called the city’s emergency lines three times that day, in hopes that the city would send an ambulance and that their son could get emergency treatment.  Instead, police arrived with guns.  Despite Wallace’s mother’s efforts to break up the confrontation, police fired 14 shots at Wallace, although the first shot immobilized him.  Wallace was pronounced dead at the hospital.  He was 27 years old.  After his death, protesters took to the streets to voice their anger about the killing of yet another African-American by police.  It is your legal right to participate in these protests, to protest this or any other injustice.  If you have questions about the legal rights of participants in protest demonstrations, contact a Pennsylvania criminal defense lawyer.

What Are Your Rights in a Protest Demonstration?

Freedom of speech and the right to peaceful assembly are two of the provisions of the First Amendment to the United States Constitution.  That means that you have the right to march in protest demonstrations and to express your views in your spoken words and on your clothing or protest signs, even if you use language generally considered offensive.  According to the Pennsylvania ACLU website, you also have the right to do these other actions without fear of arrest:

Police should not arrest you for doing these things, but they might.  Resisting arrest is against the law, even if the arrest is unjust.  Instead, contact a lawyer, and your lawyer will be able to get the charges dropped, if any are made.

Peaceful protests sometimes escalate into confrontations between protesters and police or between two groups of protesters with opposing viewpoints.  Even in a protest demonstration, it is a crime to make verbal threats against any person, to engage in physical violence, or to destroy someone else’s property intentionally.

On October 27, protest demonstrations in response to the killing of Walter Wallace, Jr. turned to unrest.  Police arrested 81 people, mostly on charges of burglary.  The city of Philadelphia imposed a 9 p.m. curfew for several nights.  Meanwhile, the Philadelphia City Council voted to forbid police from using rubber bullets, tear gas, or pepper spray against protesters.

If you get arrested at a protest demonstration, whether for civil disobedience or some other action, contact a Pittsburgh criminal defense lawyer at the earliest opportunity.  Contact the law offices of Gary E. Gerson about your case.