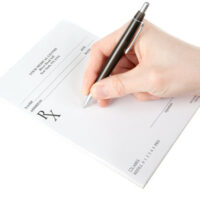 Stealing a Prescription Pad Is More Than Just Theft

Kari Halaut has had a long career as a nurse.  She earned her registered nurse license in 1990 and her nurse practitioner license in 2003.  Sometime during or before 2016, she began working at Excela Health, where she had permission to write prescriptions.  In December 2016, she began writing fraudulent prescriptions, prescribing the stimulants Adderall and Adipex to her relatives and then consuming the drugs herself.  She was fired from Excela Health in early 2018 after failing a drug test, but she allegedly took some of its prescription pads with her.  She got a new job, but her new employer did not authorize her to write prescriptions.  By 2021, she allegedly wrote 200 fraudulent prescriptions for a total of 7,000 pills.

Halaut, 54, had a near miss with authorities in 2017.  A pharmacist at a Rite Aid in Greensburg called one of Halaut’s relatives to tell her that her prescription was ready, but the relative seemed surprised that a drug had been prescribed for her.  A woman came to pick up the prescription, but upon being asked to show her ID, she left without the pills.  The state drug monitoring program eventually led to Halaut’s 2021 arrest on charges of drug possession, identity theft, and acquisition by misrepresentation.  She is currently free after posting a $50,000 bond, and her next hearing will be in January 2022.

A Pittsburgh prescription drug crimes lawyer can help you if you are facing criminal charges for illegally possessing or prescribing controlled substances.  Contact the law offices of Gary E. Gerson for a consultation.

By Gary E. Gerson | Posted on December 22, 2021
« Johnstown Man Sentenced To Probation For Animal Neglect
Sunbury Grandpa Released From Prison After Serving 10 Years Of Sentence For Trafficking In Cannabis »