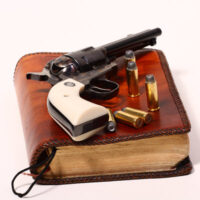 In Pennsylvania, as in many other states, there are plenty of ways to break the law that involve guns but do not involve shooting.  It is a crime to use a gun to threaten someone; depending on the circumstances, this could lead to charges of assault with a deadly weapon, armed robbery, or possession of a firearm in furtherance of a crime.  If you have lost your right to own a gun because of a prior criminal conviction, you can get charged with possession of a firearm by a convicted felon, even if the gun is unloaded and safely stored in the trunk of your car.  This does not even take into account the penalties for taking a legally owned firearm to places where they are not allowed, such as federal buildings, airports, schools, and private businesses that have designated themselves as gun-free zones.  If you are being accused of a gun crime that did not involve physical injury, contact a Pittsburgh weapons charge lawyer.

Pennsylvania allows most adults to purchase handguns and rifles.  The law does not require you to register your weapon, and you do not need a permit for purchase of a gun, open carry of handguns or rifles, or concealed carry of firearms.  You become ineligible to own guns in Pennsylvania if you have been convicted of a felony or if you get three DUI convictions in a five-year period.  Undocumented immigrants are not allowed to own guns in Pennsylvania.  The court can take away your right to own a gun because of your mental illness or substance use disorder.

Ashley Espigh, 31, is currently facing a long list of criminal charges, but the situation could have been a lot worse, as the incidents that led to her arrest did not result in any injuries.  One Sunday morning, Espigh allegedly entered a gym in Fairview Township, verbally threatened a woman at the gym, and stole several items.  For that incident, she faces charges for burglary, criminal trespass, terroristic threats, and simple assault by physical menace.  She then went to a church in Carlisle while a worship service was in progress.  She entered the church, dressed in body armor and carrying a gun.  She loaded the gun and pointed it at several parishioners.  The parishioners were able to talk to her until police arrived.  When the police came, they arrested Espigh and searched her car, finding an additional handgun.  In connection to the church incident, she is facing weapons charges as well as accusations of terroristic threats, simple assault, disorderly conduct, and unlawful body armor.  Her bail has been set at $500,000.

A criminal defense lawyer can help you if you are facing criminal charges for weapons charges, including but not limited to illegal possession of a firearm.  Contact the law offices of Gary E. Gerson in Pittsburgh, Pennsylvania about your case.